A Free Concert Every Month!
Second Thursdays through May • 6:00pm–7:30pm 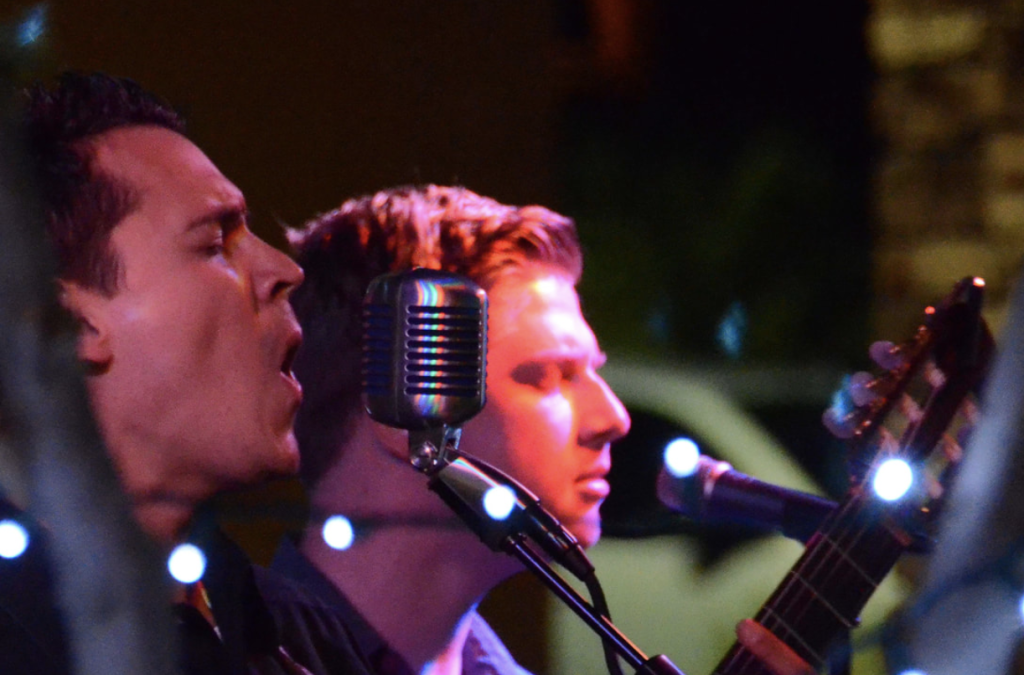 When he’s belting out the lyrics to some of the most danceable Motown, cumbia and 1970s-era hits, you won’t find George Howard standing in one spot on stage. He’s likely to climb down from the stage to sing and dance along with those enjoying the show. “We love to entertain and have fun,” said Howard, the lead singer and founder of the George Howard Band. “I’d tell people coming to one of our shows to bring their dancing shoes — they’ll want to dance.” The George Howard Band sings the blues, rhythm and blues, and top hits by Al Green, James Brown, Marvin Gaye, B.B. King and Stevie Wonder, among others.  Howard was recently inducted into the Arizona Blues Hall of Fame, Tucson Music Awards Hall of Fame and the Tucson Musicians Museum. His passion for music has led him to work on outreach programs for children, and he’s the president and founder of the Tucson Musicians Museum.

​The Wholly Cats Swing Club are Tucson’s ambassadors of the Great Swing Era, specializing in the music of the Benny Goodman Sextet featuring America’s first Guitar Hero, Charlie Christian. They have quickly gained a following as Tucson’s premier Swing Band and have been performing at several dance and jazz venues in the area while helping give rise to the live local dance scene. The band was formed by Marc Rosen and Tony Spear, whose mutual love of these artists sparked an idea for a dance band with multi-generational appeal. In addition to the songs of Goodman and Christian, their repertoire includes popular classic hits by Duke Ellington, Nat King Cole, Peggy Lee, Louis Armstrong, Louie Prima and even contemporary artists like Tom Waits and Imelda May.

OnesAll is a dynamic rock and funk band from Tucson, AZ. This band, featuring a family of musicians, has opened for headline classic rock bands to progressive jazz artists. The band entertains its solid fan base by fusing thick funky grooves, tight vocals and exciting rock sounds in inspiring cover and original music.

Sophia Rankin and the Sound

Sophia Rankin & The Sound is an acclaimed alternative folk rock band originating from Tucson, Arizona. With award-winning songwriter and front woman Sophia Rankin having performed around Tucson since 2015, the band (Connor Rankin on drums, Noah Weig-Pickering on lead guitar, and Eli Leki-Albano on bass and vocals) has spent the last year and a half together writing, recording, and performing their own original music all around Arizona. Between opening for national and local acts, headlining their own shows at venues such as Hotel Congress and 191 Toole, they have also performed at staple local events such as Dusk Music Festival and Tucson Folk Festival. Their unique blend of folk, pop, Americana, and rock music reveals introspective songwriting that connects with listeners across all ages.Their original music is available on all listening platforms and services.

Hard drivin’, old school Rhythm & Blues, complemented by some killer Boogie Woogie, by the fastest, flashiest, piano-thumping boogie man from the Netherlands. Yes, that’s right. This Dutch based, drive by piano player hits hard and will take no prisoners! As soon as he starts pounding the ivories, you’ll be on your way to the Land of Good Times. Mr.Boogie Woogie (aka) Eric-Jan Overbeek was born on April 5, 1967 in Nieuw Vennep, the Netherlands. Mesmerized by that old piano in the living room, Eric-Jan began studying classical piano at the age of eight. During his 30 year career he has opened the stage for international giants of blues like Matt “Guitar” Murphy, Johnny Copeland, Van Morrison, Koko Taylor, Magic Slim and the Teardrops and even The Blues Brothers Band.

A mainstay of the Tucson music scene, Heather Hardy was given the nickname “Lil’ Mama” by legendary bluesman Sam Taylor when she first joined his band after arriving in Tucson in 1990. Heather studied piano and violin at the Manhattan School of Music but was drawn to busking in the NYC subways and began to explore improvisation on the violin with different blues and rock musicians. She worked for many New York bands in the 80’s and most notably toured nationally and internationally with the False Prophets as well as playing for Allen Ginsberg. To date, she has appeared on over 200 records.  After arriving in Tucson, Heather began a 24 year run as a member of the Sam Taylor blues band. Heather and Sam did a great deal of playing internationally and among other awards, won the 1995 Arizona Blues Showdown. At the encouragement of Sam, she formed her own Lil’ Mama Band and was inducted into the Arizona Blues Hall of Fame in 200 and the Tucson Musicians Museum in 2018. Her home base has been Tucson for the past 20 years, but she maintains a steady performance schedule in the New York area for about 3 months each year. In addition to touring internationally, Heather works with the Amity Foundation to bring music to prisons and their therapeutic communities throughout Arizona, New Mexico and California. She is joined by legendary guitarist Alvin Blaine, Larry Lee Lerma – long time member of the Blues Brothers – on bass, and Justin Donaldson on drums.

All concerts are sponsored by the Town of Oro Valley, Town West and the Oro Valley Marketplace.

Oro Valley Concert Series is presented by Oro Valley Parks & Recreation, Southern Arizona Arts & Cultural Alliance, and Oro Valley Marketplace. The Town of Oro Valley and the Southern Arizona Arts and Cultural Alliance have partnered to bring live music to residents for over 20 years. The Oro Valley Concert Series supports local musicians with the opportunity to perform monthly in the community’s largest shopping center.  The series supports a range in music genres, from country to rock and jazz to classical.  The Oro Valley concert series truly has something for every taste of music.

The Southern Arizona Arts & Cultural Alliance (SAACA) is a nonprofit organization dedicated to the creation, preservation and advancement of the Arts.

SAACA strengthens the bonds between people, place and purpose through collaborative, arts-driven experiences.

Southern Arizona has long served as a hub for art and culture. But despite the profusion of talent, our creative individuals found difficulties in making a living from their work and sharing it with the community.

We created SAACA (formerly the Greater Oro Valley Arts Council) to address these needs by cultivating programming that puts a spotlight on our local creatives and celebrates our unique culture, while providing direct opportunities for artists to make and sell their work.

To date, SAACA has created over 300,000 arts-driven experiences, from innovative community festivals and cultural celebrations to creative sector development, and accessible arts enrichment programs. We continue to grow both our footprint and our impact as we pursue our mission of strengthening the bonds between people, place and purpose.

Back to All Events

Enter your email to sign up for our newsletter.

Be the first to know what’s fresh, new, and on the horizon.